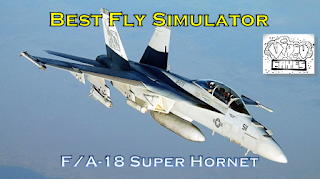 Before takeoff, you just have to know how to start manual or automatic procedures. This extremely detailed and you should know how to access the device and ACU-II by speedy (and others)

It feels so good to have the control during the flight but also very rare. Most only have Flight Simulator control dogfighting but F/A-18E Super Hornet lets you start off, turning a flutter of wings, power brakes, wheels, radar, autopilot and so on.

If you turn off your device in mid-flight, will crash! However, the invincible mode allows you to play the game and master control without worrying about blowing up.

Watch the opening sequence of the movie introduces an interesting conflict with Russia and started with a bang. Excellent music and fused with a heroic battle. Though, why not include designers as background music during the actual gameplay secret as it will increase the level of excitement. Please Watch this video for more great maneuver of F/A-18 Super Hornet - Mission Completed

The film led to a combat mission but never developed the story as you progress. It's a little disappointing, but because the F/A-18E Super Hornet focus more on accurate flight simulation game action, is perhaps understandable.

The cockpit is the most impressive part of his game. It is so refreshing that you could really use any buttons and the buttons on the control panel.

Fortunately, the keyboard commands available too, so you don't have to go looking for the right button while enemy planes fired missiles at you. Cockpit so has to scroll down to see everything. Best Fly Simulator 2017
Share on FacebookTweet on TwitterPlus on Google+
« Newer Post Older Post » Home